As the air felt colder and my breathing grew sharper, I knew this wasn’t going to end well.

I jogged on, feeling the heavy weight of my legs that were aching to cramp itself in.

Every single muscle – from my calves to my thighs – were burning, and my breath only got shorter and shorter.

Gasping for air, I wobbled my way to the side of my car. With no energy to even get the door open, I fell to the ground – sprawled on the side of the street.

My head throbbing with blood and adrenaline rushing through my veins, I ripped my phone out of its arm strap.

That my friend, was January 13, 2017. A random jog that turned into a realization:

Physical exercise was an extremely lacking part of my routine in 2016.

My focus was on other things – 2016 was the breakthrough year for my freelancing side hustle. It was hell trying to balance school, work, family, friends, and relationships in general together.

Health took a back seat on my list of priorities.

With the nightmare of a jog on the 13th of January, I knew this had to change for 2017.

So on one random day, I thought of challenging myself to run more. My girlfriend even got the moment on film. HAHA.

(You see my shaking my head in the last few seconds of the video? That’s me regretting making that video. HAHA. Kidding. I also don’t plan on placing or even competing in any way. That’s some next level shit. Maybe next year?)

But right when I wrote this post, I decided to make it 20 kilometers. And top of the ₱2,000 consequence, I’ll be donating ₱3,000 (in goods) to homeless people or charity on December 2017. This brings the total consequence up to ₱5,000.

Because in my opinion, the best goals aren’t the ones you can’t reach. In fact, I don’t see a goal – the destination you may call it – as the driving mechanism.

It’s the journey. It’s the attempt to hit that crazy fucking goal you set out for yourself.

Fall in love with the journey, not the destination.

With that said, I’m by no means a fitness or running expert, so we’re going to fail (and succeed!) our way to the end together. I hope you learn a thing or two from it. 🙂

Putting this up as a public challenge on my website was spontaneous on the 7th week – that’s why you won’t see any updates from the week before that.

I do plan on placing a Week 0 to show you what I did to kinda prepare for this, what I use, and what I think is really essential to get started on a challenge like this one. Enjoy!

Did some research this week on running. Turns out that the training to run 20km isn’t as linear as I thought.

At the start, I did basic math to find the right weekly increase in jogging distance to get to 20km in the remaining 45 weeks.

As long as I hit at least 0.4km per week in terms of distance increase, I’d hit my goal of getting to 20km by the end of the year.

After doing some research, it looks like that isn’t really the case. Here’s some insights/lessons learned this week:

Running 20km is basically called a “half-marathon” . . . although the real definition of half marathon is 21.1km, it’s close enough.

Takeaway: If you wanna learn how to run 20km, search on training plans for running a “half-marathon”. Or follow along on this post! 😉

Lesson 2: There are long runs, short runs, tempo runs, and SO MANY MORE.

Most of the training plans I found never recommended my method of doing it, which was to slowly increase the distance each week.

What most recommended (or the ones I could easily Google) is making a huge jump from one week to the next, and doing a slew of different paced and distanced runs in between.

These runs with the huge jumps are usually your long runs, where you run at a pace slower than your usual pace. Here are some others I found:

For example, if you’re at 5km on Sunday, you do 2-3 runs that are either shorter, faster, etc., than that from Monday to Saturday, and make a jump to something like 7km or 8km on the next Sunday.

From what I read, varying your run style across your training plan increases your endurance. Which makes sense. (I guess).

Honestly, this is some advanced level shit that doesn’t make sense to me (yet).There’s so many ways to kill this cat – I think I’ll have to approach an experienced runner to understand this more. I’ll think about in the future!

But what I do understand is that I’ll have to run more than once a week – and do it differently from my usual long run. My current schedule only permits one run per week, so I’ll try to fit in 1 more run within the week.

If not, I think my current plan of small constant improvements has to stick. Got no other choice.

Takeaway: Make the time to do at least 1 to 3 short runs within the week, if schedule permits.

Lesson 3: You don’t have to run the whole fucking time.

I honestly thought that I’d have to run the entire time every time I do a jog. I think it’s the primary reason why I feel burned out every after run so far.

Pretty cool. Now I don’t have to end runs like I can’t feel my legs anymore.

My first run this week, I pushed the pace to start.

On the second run, ironically, I planned to take things slow and maybe just hit the same distance.

Nothing special. Not trying to beat it or anything, so I started slow. The result? 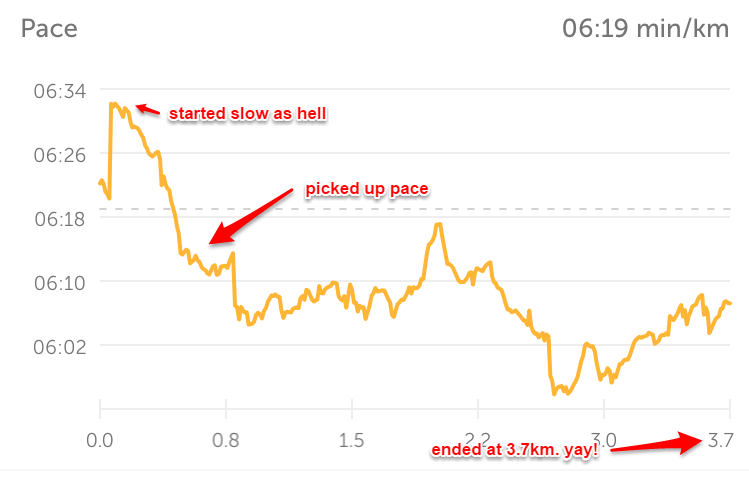 I beat my previous distance by 1.12km, which equals to a 45% improvement.

I felt like I could’ve even ran one more kilometer, but I let it go. 45% sounds super fucking good to me.

Better yet, I didn’t feel tired by the end of the run. No throbbing head ache, and no burning leads wanting to cramp.

Wow, a full 10 weeks before I got back to writing.

Here’s an insight I have that’s NOT even about this whole challenge.

You know what’s even harder?

This is exactly what’s happening to this challenge. I’m doing pretty well on the running end of things. I’ve consistently increased my longest run by 0.5km per week on average, and if I continue at that pace, I’m on track to hit my 20km goal.

But there’s one thing I’m falling out on.

I have to admit—it’s hard. It’s an almost unreal challenge to stay committed to multiple things at the same time and I salute anyone who can do it.

It may feel impossible (especially with how I’m talking about it), but there is a solution.

A simple but terrifying solution. One that people don’t even consider.

I’ll write more about that soon. For now, I’ll leave it at that. Subscribe below if you want to hear when I do talk about it!