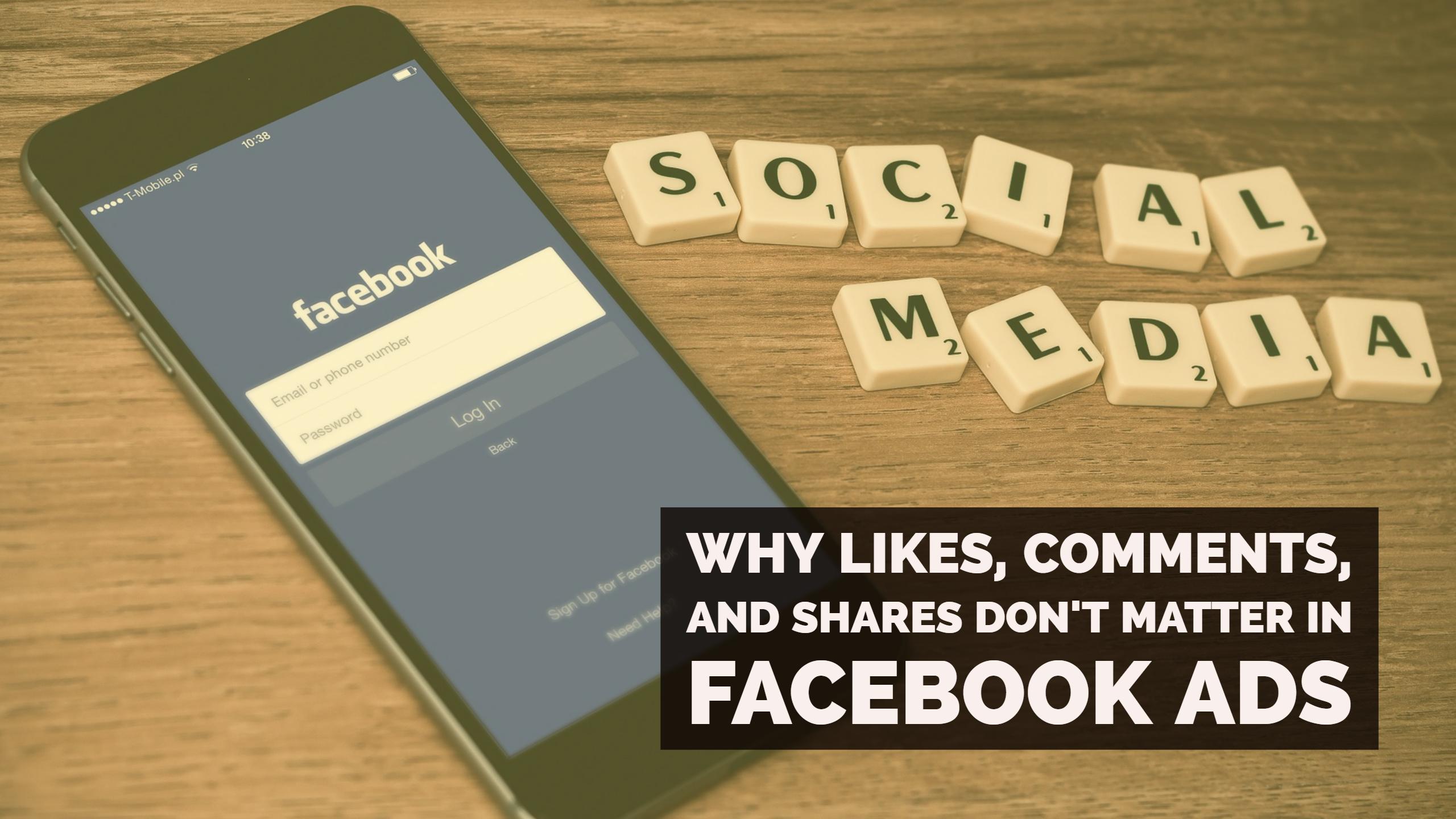 Let’s be real. You probably have a Facebook Account. You probably also spend around 20 minutes per day, scrolling through News Feed. If you don’t, hit me up and let’s chat because I definitely need to know how you do it.

Everyone on Facebook knows that the primary way of interacting with anything on News Feed is threefold: likes, comments, and shares.

Okay, they threw in reactions a few of months ago but let’s keep it simple.

But for advertisers like you, do these metrics really matter in your advertising? Simple logic will tell you it does – the more people interacting with my ad probably means I’m doing great, right?

Advertising in a sentence

Here I quote my best friend (probably yours too):

“Advertising is a form of marketing communication used to promote or sell something, usually a business’s product or service.”
– Wikipedia, 2016

Our best friend is missing something though, and it’s the fact that advertising is any form of marketing communication that is paid.

Let me shorten it for you. You pay to sell something. Summary of the last 3 paragraphs above.

The past decade has seen a complete shift in terms of marketing. The Internet has opened up so many channels for us to use to market, and therefore, advertise. This change also empowered anyone who advertised online to be able to track every single metric you can think of.

Want to know how much it costs to advertise a specific keyword on Google? Check.

Want to know how many people who visits your sites signs up for your seminar? Check.

Want to know how much it costs to reach a married man working in a job in the IT Industry that earns him over $50,000 a year and is based in Orange County, California and just recently welcomed a newborn baby into his life in the last 6 months?

Yup, it gets that targeted. Check(mate).

This exact infrastructure will also give you the power to track the financial return on every single campaign you run. That’s the beauty of Facebook, and many other online advertising platforms. You get immediate feedback on what you’re running. This allows you to change course if something goes wrong, or spend more money when something goes right.

In traditional, mass media advertising, you wouldn’t know the exact return of your ad spend. Throw a one-page advertisement in your local newspaper – you’ll never know how many customers that ad brought in. Run a 30 second radio ad in the middle of the afternoon – you’ll also never know how people converted from listener to buyer or even an interested prospect.

In Facebook, and in many other online advertising platforms, this is standard. It knows who saw and clicked the ad, and if that person went ahead and registered for your event. You’d know that it costs you ₱3.21 to get a click to your registration form – and it costs you ₱252.12 to get that person to buy your ticket.

Is that good? Well it depends on your business. If your tickets are ₱900 each, you clearly have a winner.

What matters is that you know the exact numbers running your business.

Not just any number, but the numbers that matter.

You’re probably thinking, “How about likes, comments, and shares?” Why haven’t I mentioned it yet?

Because they don’t matter.

In the end, what matters (especially when you’re advertising on Facebook) are only two metrics:

Don’t feed yourself with BS and tell yourself that you’re “doing good” because you’re getting “loves” and “Ha-ha”s in your ads. That doesn’t matter if you aren’t getting back the money.

Let’s go back to our best friend’s definition (which I shortened): you pay to sell something. If you’re spending your hard-earned money and not selling anything, then something isn’t right. Especially inside a platform like Facebook Ads where you can track almost everything.

P.S. There are definitely times when your likes, comments, and shares are (kind of) important on Facebook Ads – and that’s when you run ads for brand awareness. These are usually companies and brands that monetize the reach, traffic, or attention they command. You have to be careful though. You need to define the exact goal you’re aiming for with a brand awareness campaign. What’s the next step you want brand-aware prospects to take? If you have a million likes, and only 5 people taking the next step, you still have a losing campaign.

Unless you have a magical way to monetize likes. If you do, I need to talk to you right now.